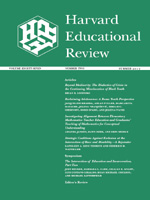 My essay, “Beyond Mediocrity: The Dialectics of Crisis in the Continuing Miseducation of Black Youth“, was published in the Summer 2017 Issue of the Harvard Educational Review. I explore why Gloria Ladson-Billings’s 2006 pronouncement of the nation’s “education debt,” as opposed to “achievement gap,” has not gained traction in the national discourse around educational disparity. I contend the education debt is a more nuanced, historically based, and generative framing of racialized educational disparity, which has been marginalized by the narratives of crisis in education, specifically with black youth, that necessitate a frantic urgency allowing for ahistorical, quick-fix solutions to complex problems. Through a tracing of four major epochs in African American education, including the mid-nineteenth-century era of slavery statutes, Reconstruction, post–Brown v. Board, and today’s early twenty-first-century “crisis,” of the underachievement of black youth in schools, I consider how African American education has always been precarious and, thus, able to be labeled a “crisis.” Using a combination of synchronic (snapshot) and diachronic (longitudinal) analyses, I demonstrate how the achievement gap logic does not allow us to address historical constructions of contemporary disparity. I conclude the essay by suggesting that African American self-determination, and not the reification of the nation-state through state-centered reform efforts, should be the driving force behind educational decisions that impact black youth.